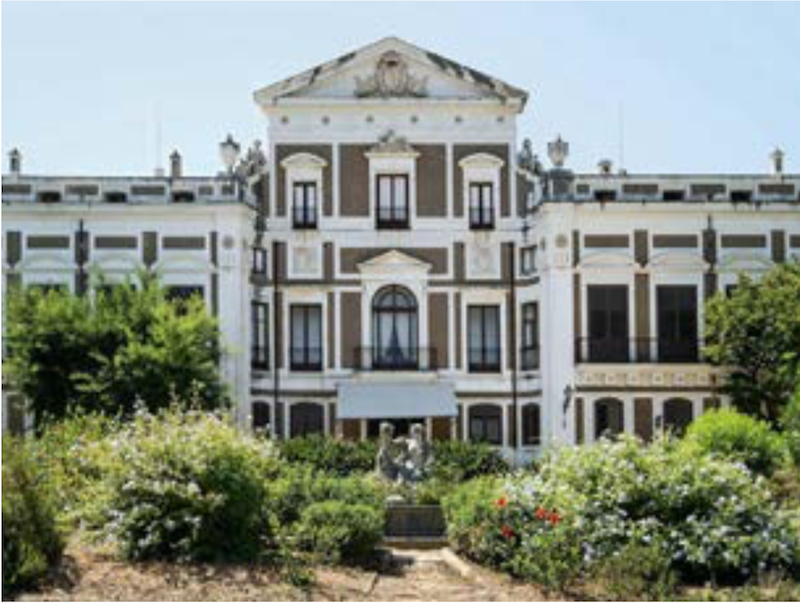 The villa was built around the middle of the XVIII Century by the will of the Prince of Comitini, Michele Gravina,  and shortly after it was purchased by the Lanza Princes of Trabia who decided to keep the neoclassical style project initiated by Nicolò Palma. This decision made the villa really unique in comparison to the most villas of Bagheria.

The Room of the Restless

Moncada  accomplishes one of his most evocative interventions for the Villa Trabia in Bagheria, the Room of the Restless, an environment entirely conceived  as a place founded on the dynamism and energy of his pictorial motifs, translated into the ceramic that inhales the light and the freedom of the  border world.

From the beginning of the seventies ceramics constantly accompanied Ignazio Moncada’s painting work, absorbing its modes and signs and inflecting them in the specificity of materials and processes – but also forms and structures such as plates and vases – which in turn were charged with historical memory.
Created in 1995 for Villa Trabia, in Bagheria, the Room of the Restless similarly reworks another central aspect of the artist’s research, that component of painting which becomes environment and space that he had found in the great tarpaulins covering scaffoldings (ponteggi) during architectural restoration (Pont Art, as these 1982-92 interventions were immediately christened), a spectacular occasion for fusing the movement of colour with that of the city. But Pont Art, in turn, was already developing the principle of a vibration of colour which, in the cycles Transparencies and above all Alesa, varied the signic and chromatic structures in almost musical terms.
In the Room of the Restless that outward-drawn procedure introflexes, and it is precisely this contrast between the movement of expansion sought in painting and the interior environment in which it is articulated that bears out the reference to restlessness. Along the ceramic facing of the walls, floor and ceiling of the room these open articulations succeed one another like this, which Moncada had experimented with in the nineties cycles called Ambivalences and Differences: slight spoors of colour as if dancing in their transparencies and overlaps, with residual traces of elementary geometries – circles, ellipses – and other traces instead in the diagonal, almost as if shifting in the breeze. Reds, blacks, greens, turquoise blues, a Mediterranean palette: restlessness at bottom is none other than an invitation to the journey.